by Booming Games
Play Demo
By pressing "Play Demo" you verify that you are 18 years or older.

Aztec Palace is a five-reel online slot game produced by Booming Games. With a return to player (RTP) of 95.57 percent, it's an extremely volatile Aztec-themed game. Free Spins, an extra game called Pick a Skull, and Wilds all appear in this slot. 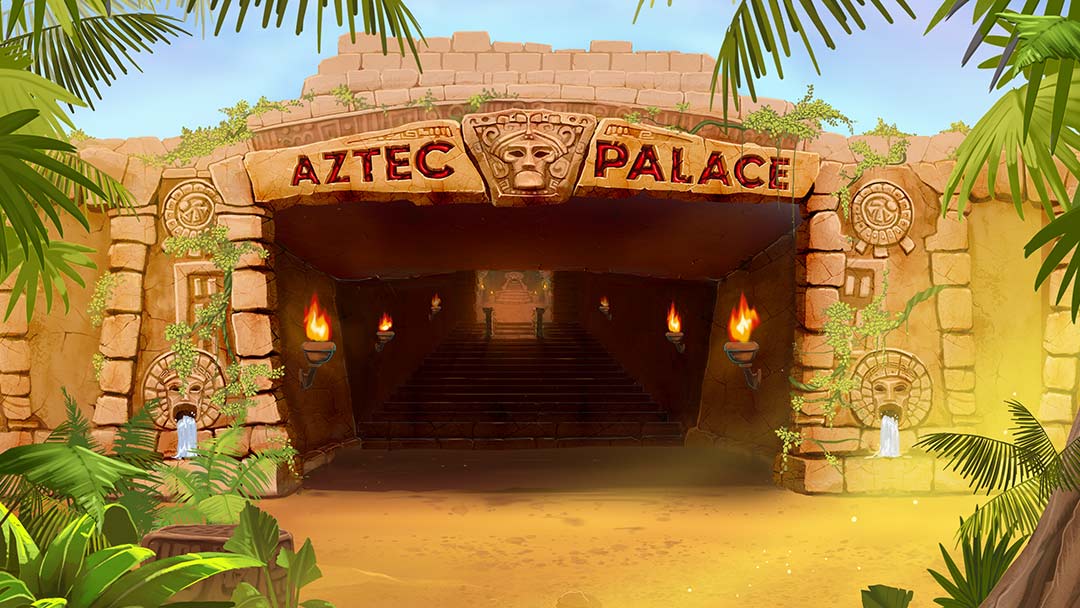 The reckoning is coming, how will you win this final battle and earn BIG rewards

Slots players are fascinated by the Aztec Empire for a variety of reasons. That a mighty civilization could develop and die, leaving behind nothing but ruins may be the reason. Another possibility is the prominent role played by the pantheon of barbarous gods who demanded human sacrifice to be appeased. We're pleased to comply by playing the newest slots based on the Ancient Egyptian theme as soon as they arrive.

There are several popular games in this genre, including Aztec Warrior Princess, Gonzo's Quest, Rise of Maya, Ecuador Gold, and our current favourite, Aztec Bonanza.

Aztec Palace is all about vibrant, colourful visuals that look just as beautiful on mobile devices as they do on desktops. The brickwork is riddled with holes, and snakes and butterflies may be seen slithering between the gaps. Two stone lion water features with water pouring from their mouths are placed on each side of the reels.

The reels include a variety of colourful masks and artefacts, as well as stone-carved playing card images. The soundtrack includes pan pipes and jungle drums, which wonderfully capture the flavour of the game.

Aztec Palace has a good RTP of 95.57 percent, yet it is a high-volatility online slot. Before risking any of your own money, proceed with care and make sure you've played the game in demo mode properly.

You can play Aztec Palace with 0.01 to 20.00 coins per payline. With a betting range of 0.20 to 400.00 for each play, the game's 20 fixed paylines provide a wide variety of stakes. When three, four, or five identical symbols appear in a row from left to right on a payline, you'll be paid out. Bonus and Scatter symbols are the only ones that don't pay out money, although they still have the potential to do so. Only five of a kind wins when playing with the Wild symbol.

Besides the normal Wilds and Scatters, Aztec Palace has an extra Bonus symbol that triggers a Skull Pick game.

There are two types of Wilds that might appear on the reels at any time. If you manage to land five of the standard Wild symbols, which are worth 50 times your bet, you'll be rewarded with a cash bonus. However, this is only the beginning. Aside from the Bonus and Scatter, it may be used as any other symbol in the game as a substitute symbol. In the event that it does occur on a payline, there's a strong possibility it will contribute to a winning combination.

Then there's the Bursting Wild, which may appear on any reel in the game and is a unique form of Wild. When they land, they do precisely what their name implies: they burst, turning up to eight symbols on the reels wild and allowing players to win big.

It's impossible to miss the Bonus symbol, which has the word Bonus written across it. Pick a Skull is activated if you land three or more of them on the wheel in a single round. Selecting a skull will disclose an immediate monetary award, and you may do so by clicking on it.

Even so, Booming Games has included a free spins feature, which is triggered when you hit three or more Scatter symbols somewhere on the reels.

In the Aztec Palace, new reels are presented for you to spin. Free Spins are provided, and all low-value card symbols are eliminated from the reels during this time. If you're lucky enough to get a wild or burst wild, bonus symbols, or scatters, you'll still have a good chance of winning a large cash payout at the end of the game.

We believe every slots fan should give our free Booming Games slots a spin since they're so much fun! Aztec Palace is the latest in a long line of beautifully-designed games with many entertaining additional features. Adding Bursting Wilds and the Pick a Skull game, as well as more chances to earn a cash award, makes this game much more enjoyable. Take a spin right now, and let us know whether you agree or disagree. 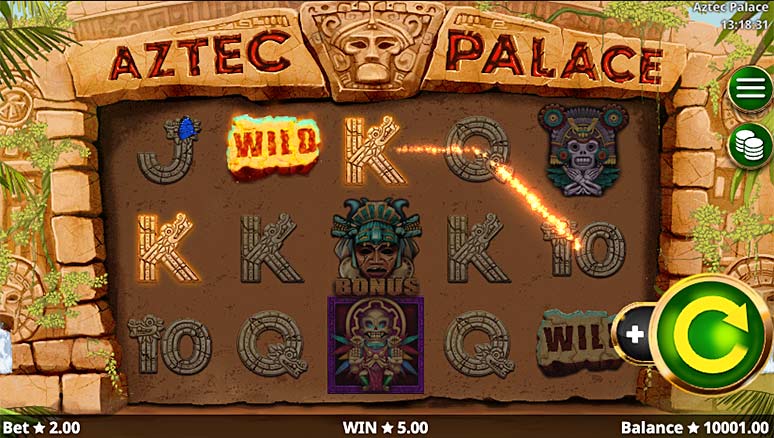