An efficient and smooth digital payment is a priority, whether you are playing at your favorite casino online or you are making a payment to another party across the world. This is why many gambling sites and financial institutions rely on Neteller as the digital payment processing system of choice... Neteller has come to be used by millions of people around the world, most of which use it for their online casino banking. New payment methods plus the popularity and adoption of cryptocurrency mean more options than ever when choosing a service for your online gambling. We don't need to see into the future to know that more e-wallet services will continue to spring up. As good as that sounds, it also means you need to do a more thorough check on these payment methods before using them. One of the most popular digital transaction services on the internet is Neteller. In this Neteller review, we will be taking an insightful look into the Neteller payment method, its operation, security, registration and verification procedures, efficiency, advantages and disadvantages, and putting its services side-by-side with a similar company.

Affiliate Disclosure: At MrWin.com, we strive to match players with the most appropriate casino and sportsbook offerings. Consequently, some of the links to suggested sites are affiliate links. This means that if you visit a site via our link and make a deposit, MrWin.com will get a commission at no additional cost to you. Our editorial standards are commercially independent and adhere to a professional approach, so all casino reviews and suggestions remain unbiased.

What is the Neteller casino payment method?

Neteller is a global online payment method, or in other words, a digital wallet that has consistently been providing payment and transfer services on the internet. It has been doing this for more than two decades. It was founded in 1999 by Optimal Payments Limited in Canada before moving to the Isle of Man in 2004. The company had since gotten a new identity. In 2015, PaySafe Group limited (formerly Optimal Payments Limited) became a more sizable global payment company after acquiring a top competitor and a European online payment processor, the Skrill group. In the same year, it accrued revenue of $1 billion and appeared on the London Stock Exchange. With its sister company, they are among the most used e-wallet providers in the world. Neteller service is preferred by many merchants and website owners for processing transactions, especially online casinos and other gambling websites worldwide. It is no surprise as it has been offering its reliability, security, and consistently smooth transactions for online casinos since July of 2000. Neteller payment service is widely used in over 200 countries and by millions of customers in almost every part of the world. It has an excellent reputation for smooth and safe purchasing of goods and services online and getting your online fund into your debit or credit and personal bank.

Registering an account is as free and swift as opening an account online can be. Lets us break it down into a few simple steps. To withdraw is also convenient with a good number of options. We advised that you keep your account active, use it at least once in 12 months to avoid the administrative fee deduction. 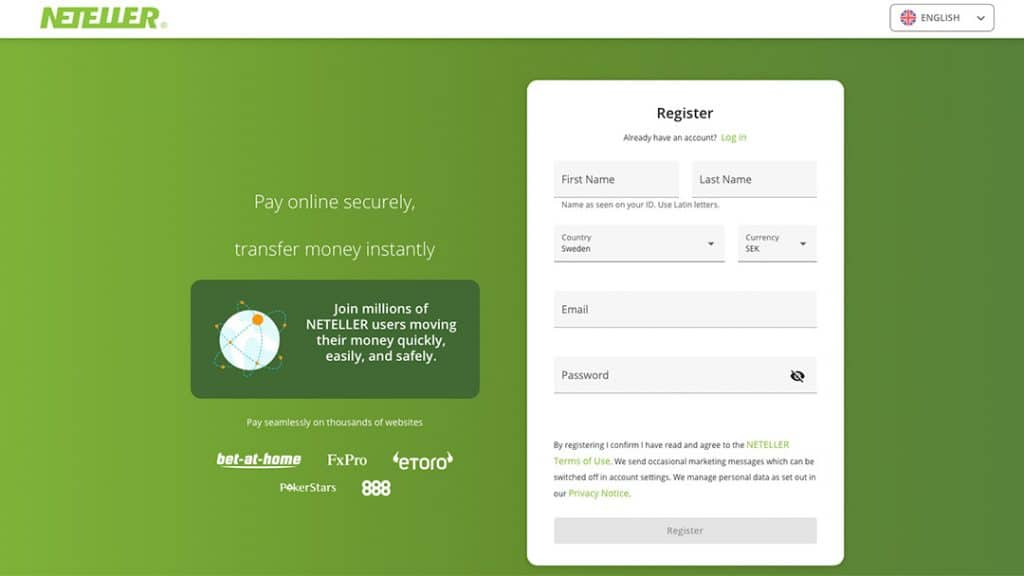 Depositing and Withdrawal with Neteller

To make deposits into your Neteller account, you will be charged 2.5% of the amount less than $20,000 and free for money higher than that. Note that only international bank transfer, Skrill, and cryptocurrency deposit methods allow you to deposit more than $20,000. Your VIP level status also determines the maximum withdrawal limit.

The withdrawal limits on Netteller depend on the method you use to withdraw and also your VIP status on Neteller. For example, You will be able to withdraw between $1000 to $3300 daily depending on your VIP level.

You can withdraw between $20 and $100,000 in a transaction. The complete information about your deposit and withdrawal at each VIP level is on the Neteller website.

In addition to the 3.99% charge on a transaction between two different currencies, there is an annual fee of $10 for using a Neteller card.

The rate charged on the crypto exchange depends on the currency of your Neteller account. For an account in US Dollar or Euro, the currency exchange fee is 1.5% and 3% if it is in other currencies.

It charges a fixed amount of $10, or the equivalent in other currencies, on every transfer.

You incur in charge of that $30 if you claim back the money after depositing it into your Neteller account.

Incorrect transaction reversal fee. We sometimes make mistakes, but if the error is sending money from your Neteller account into the wrong account, it will cost $25 to request a revert.

Though customer service is not that great based on some online reviews, they are reasonably responsive and courteous. Neteller provides several means for their customers to get in touch with them for inquiries or issue resolution. A quicker way to get a response is through Twitter.

You can also contact them with the support email help@neteller.com. Another fast way to get the attention of customer support is through phone support on +44 20 3308 9525. Any call you make to that number is toll-free.

Of course, yes. Neteller is one of the safest payment companies you can use online. The company processes thousands of transactions daily without issues. It is a full FCA-compliant authorized company, the trustworthiness of the company has never been in doubt in its over 20 years of operation.

Having established that Neteller is a trusted company, and the money in your account is 100% safe with them, we need to consider the safety of your money and personal information. With cutting-edge SSL encryption technology, it is almost impossible for your money and information to be compromised in any way.

It employs one of the best and the most trusted anti-fraud tools that keep your transactions and funds safe and secure. There is also an extra layer of security with the 2-step authentication, which requires you to use a one-time authentication code sent to your registered phone number or email address to perform actual transactions.

It is essential for signing in to your Neteller account or merchant account, and this is vital as it helps prevent the overexposure of your security ID and account information.

For even a further layer of security and anonymity, you can get a NET+ card. The card not only gives you the freedom and anonymity to make transactions across ATMs and other platforms from anywhere in the world. It also minimizes Cyber-fraud and identity theft.

The combination of a good reputation, cutting-edge encryption technology, state-of-the-art security protocol, and good gives the customers the peace of mind that their money is safe and secured. You also have a role to play in keeping your account safe by protecting your email, Neteller login, and other information relating to your account.

Can I transfer money from Neteller to my bank account?

The simple answer is yes, you can. Neteller is a payments service that makes it easy to send money from your Neteller account to your bank account and vice versa.

However, this withdrawal option is restricted in some countries. Also, note that a fixed amount of $10 or the equivalent in other currencies applies to every withdrawal this way. Add that to the currency exchange of 3.99% if you transfer to a different currency to your Neteller account.

Another thing, you may have to wait for 3 to 5 working days for the completion of your transaction. Other deposit and withdrawal methods on Neteller include bitcoin, Skrill, Visa, MasterCard, Trustly, Trustpay, etc. 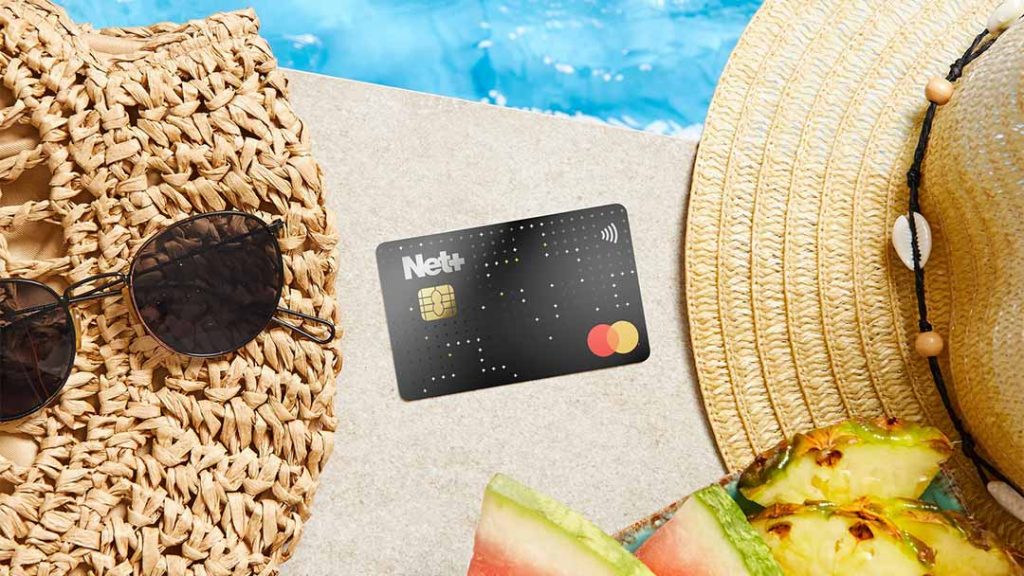 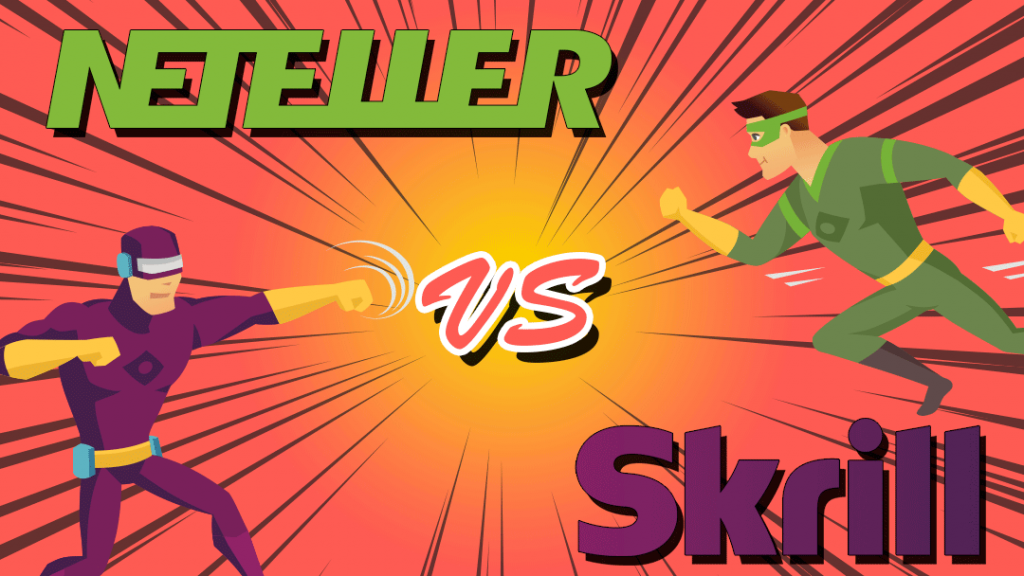 Despite having the same owner, there are significant differences between these two e-wallets.

Which is better, Skrill or Neteller?

Both Neteller and Skrill are among the popular choices of internet users in making payments online due to their high level of security, convenience, quick and smooth transactions.

So definitely, these two virtual payment services have a few things in common; Skrill is also close to two decades of providing efficient and secure payment services in over 200 countries of the world. PaySafe Group Plc owns Skrill too. The transaction fees by the two e-wallets are almost the same.

Despite having the same owner, there are significant differences between the two online payment services. To make your decision of choosing the better payment service between Skrill and Neteller, we compared these two payment methods honestly, and we are pleased to share what we discovered.

Neteller has the edge over Skrill in this one. Neteller has more deposit methods than Skrill. But the latter offers services such as transfer, interbank transfer, and receiving money via P2P free of charge and generally charges less cash on its transactions than Neteller.

Comparing the yearly volume of transfer you are allowed to do on each VIP status of both Skrill and Neteller, we found out that Skrill's total transfer amount is higher than Neteller's.

We have to state that the two are continually looking for ways to make the lives of their customers more comfortable by providing extensive FAQs and other information on the websites.

While the two payments services do not have the best reputation online for customer support compared to other e-wallet services, Neteller is slightly better based on non-VIP customer reviews. It has quicker responses and handles issues faster for non-VIPs. Skrill is reputably worse in this aspect. Some customer reviews reveal that it sometimes takes its customer support a week or two to respond.

Neteller and Skrill restricted people from some countries from opening an account with them or using their services. That is mainly due to the regulatory law of some of these countries, strategic business decisions, and other criteria. Putting the two platforms side by side, skrill services are available in more countries than Neteller. Overall, Skrill does not offer accounts and services to 39 countries against 54 restricted countries on Neteller, including the United States of America.

The selling or exchanging of cryptocurrency is supported within the two e-wallets. On Skrill, you can convert your FIAT to cryptocurrencies free of charge. There's also no currency conversion fee when trading crypto, provided EURO is your default currency.

Trading with another currency other than euro attracts a 1.5% foreign exchange fee and an additional fee charged for buying and selling cryptocurrency. Neteller offers free currency conversion for an account in USD or EUR but charges a transaction fee of 1.5%. Those operating accounts in currencies other than USD or EUR is charged 3% for buying or selling cryptocurrency.

Should you use Neteller? And why?

Whether you are a gambling website owner, a merchant, or a regular internet user, Neteller ticks most of the boxes of a reliable and trusted payment service. Transactions with or on Neteller, whether you use a mobile app or the website, are generally quick, safe, easy to use, and convenient with competitive transaction fees.